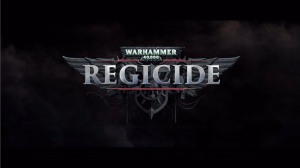 Do you like chess? Do you like Warhammer 40,000? If you said yes to either of these questions, I have the game just for you coming from Hammerfall Publishing. By recommendation by one of my friends from college, Games Workshop has licensed out their hit sci-fi tabletop miniatures game by blending it with the classic turn-based strategy game of chess. In Warhammer 40,000: Regicide, you play as a battlefield commander with a small squad to dominate your opponent on the battlefield. As chess is typically a two-player game, so is Regicide in this case. As there is still more content coming for the game, for now the latest update has given us the first chapter of the campaign.

The campaign, so far, follows the Blood Angels chapter of Space Marines as they investigate a distress signal on one of their planets. Come to find out, it was a trap set by the Orks, led by a local Warboss, while he uses his weirdboy (an Ork with powerful, but undisciplined psychic powers) as a decoy for the Blood Angels. The Blood Angels’ Librarian, Baldessar, corners the weirdboy before he can teleport away. I haven’t gone all the way through the campaign so far, but for the amount of the story I have seen, it only adds more to the overall lore of the Warhammer 40k universe. I’m looking forward to what else happens during the story, along with the addition of more chapters and factions (such as the Eldar, Tau, and Tyranids; these would be awesome to play with in the game).

In “Regicide” mode, the game proceeds like a typical miniatures game but with the addition of chess rules. Each player has two phases, movement and initiative. Every turn, a player generates three initiative points (up to an initial maximum of five with unit abilities enabling the player to increase the cap) to use during the second phase. In the movement phase, the game proceeds like a normal chess game, with the player moving one chess piece. In the initiative phase, however, the tabletop rules take over. The moving player spends initiative to attack or use abilities in trying to weaken and eventually kill their opponent’s pieces. The algorithms of the game take care of the numbers (rolling for attack and dealing damage appropriately). The ranks of each type of unit are as follows:

This takes chess to a whole new level as tabletop combat rules are also brought into play when you go into “Regicide” mode. Of course, if you want to play just the vanilla game of chess with the themed pieces, Hammerfall already has you covered with the “Classic” mode. Versions of the game for iOS and Android are currently still in development but for now, Warhammer 40,000: Regicide runs for $13.99 in Early Access only on Steam.

Preview Advice: Bask In It

It’s actually been a while since I’ve played any sort of game with full motion video in it (aside from Command & Conquer: Red Alert, but that game has FMV cutscenes; I’m talking about a game that heavily involves FMV as a focus in the gameplay…think Night Trap from the Sega CD days). I noticed, however, that while going through the Steam store at the time, I noticed a newly released indie game that had a lot of good reviews overall: Her Story, developed by lone developer Sam Barlow.

Her Story is about the player, who peruses an old police computer that has a fragmented database with over 300 video clips of an English woman. This woman is interviewed seven times by the police about her husband’s murder, but due to the damage to the database, only the clips where the woman is talking survived. Searching the clips by keyword, your job is to find all of the video clips in order to restore the database and find out the exact details of the crime.

Simple? Yes. Easy? Not by a long shot. As many clips can be found by simple keywords, often you’ll find that you need to be specific with keywords in order to narrow down clips that you still need to find, as the computer interface only allows the first five clips to be viewed if your search turned up more than five clips at a time. It seems like an easy task at first but things start getting tough when you start to run out of ideas for keywords to search with, especially when some keywords pull up a lot of clips that you have seen before. It can be very frustrating but the payoff is very nice, as many of the more important clips reveal more to the story. However, this leads me to my first piece of criticism: there are too many clips that have absolutely no bearing on the story whatsoever. I mean, the game get insanely tedious after a few hours because of the multitude of clips that are simply there for filler. I will admit that I had to split game sessions up because of how bored I got after a while trying to search for new clips. If there were far fewer clips to go through, that would have been fine, and I still would have gotten a lot out of the game. The tedium of searching through dummy clips, though, didn’t really add to the gameplay very much.  The story itself has a number of interesting twists. As you go through the more important clips, you’ll find some interesting things about the woman in the interviews. The biggest twist comes at the very end of the game, which is what makes the payoff so well.

Her Story was a pleasant experience to play through with a well-written story, but the boring number of clips to go through forced me to play in sessions due to the rather large number of irrelevant clips. Beyond that, I recommend giving this game a spin. Unfortunately, it’s only good for a single playthrough. For the very low price of $5.99, Her Story is found on Steam and directly from the game’s website, and for $4.99 on the iTunes App Store (for iOS).

= Only good for a single playthrough, but the story leaves a lasting impression