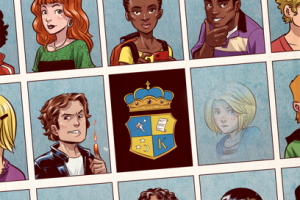 Once again, I picked up a new text-based adventure-RPG (ish) game from Choice of Games. A long time ago, I bought the entire trilogy of their superhero-themed Heroes Rise, which I liked. This new one, Psy High, tells your story about being a high school junior who returns to school with a magic power (once again, being able to choose whether you’re a dude or chick, and whether you’re straight, gay, or bi).

The game takes place in Kingsport, Massachusetts, which is also the name of the fictional town from H.P. Lovecraft. Kingsport is based on the real town of Marblehead, MA, located east of Salem. At Kingsport High, you kick off the story with your hobby-job of being the school’s private investigator, in search of a girl’s stolen iPhone. It’s revealed in the beginning that you, along with about a quarter of the student body, developed certain abilities during that previous summer, yours being clairvoyance. Should you choose to exercise your power, you also develop telepathy in a limited form, as you’re unable to read another person’s mind if they’re also being affected by magic (whether by an outside influence or their own powers, in the case of magic-users). You soon discover that something’s off at the school. The teacher that everyone scared of is also in charge of the detention room, which holds a deeper mystery.

You can also have several different romances. You start with your crush (Tyler if it’s a guy, Taylor if it’s a girl), but your best friend, named Alison, confesses that she’s in love with you later on. As the game allows choice of orientation, if you play as a girl, you can either start dating Alison when she confesses her love to you or go out with Taylor from the get-go. As always with RPGs that I play, I always put myself in the game as if I was there, and I make my choices accordingly. I will say that even though I’m not too keen on homosexuality to begin with, I still ended up accepting Alison as my girlfriend despite the fact that she has two moms. I mean, come on, if my closest and best friend had two moms and said that she was in love with me, I would go out with her.

No matter what your personal opinions are, the whole point of Choice of Games’ stories are all about that: choice. Your decisions, like Telltale Games‘ Telltale Tool engine, influence the direction of the story (although the Telltale Tool is much more in-depth, but I digress). As with Telltale’s games, though, the stories aren’t without fault. I did see some proofreading issues in some spots (especially with the sponsored games, which are apart from the in-house games) and also felt like some decisions were forced. However, I think this was a minor issue, as Telltale’s games also do that to tell a specific story.

So, overall, I liked Psy High, although it wasn’t as in-depth as Heroes Rise was, partially due to the fact that HR spanned three games to PH’s one. You can find Psy High on Steam or on Choice of Games’ website for $2.99.

= The game allows LGBT romances, but entirely left to the player to either explore or ignore